Update and Redux: C – Why did we make this week all about Jim? Because it’s his Birthday in a few days and he deserves to be honored. He’s a great, hard-working, inspirational guy who loves food, all things French and fine living … mindfully. Happy Birthday, Jim!!! On his birthday, we always celebrate with his favorite dessert. This cheesecake was really easy to make and delicious. And, it’s French. Hope you have a great birthday, Jim. 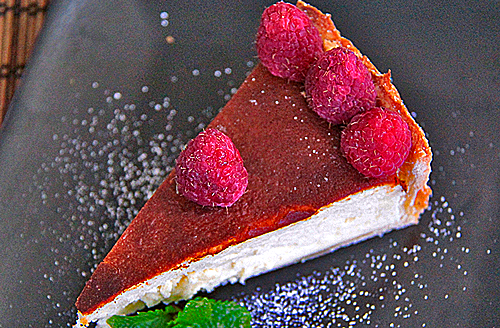 With his birthday upon us, again, I needed to keep the cheesecake tradition going. Sadly, I was a bit stuck. My friend, The Internet, didn’t give me any good advice this time. Not many good suggestions. So, I turned to my trusty old friend, The Cookbook. 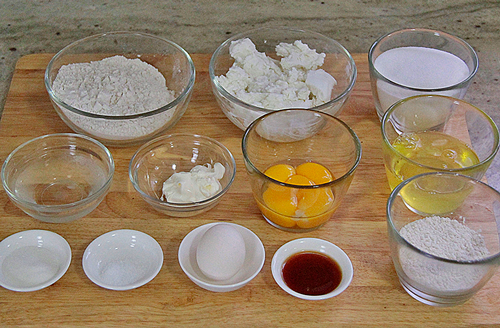 Jim has had David Lebovitz’s new book “My Paris Kitchen” on his desk since he got back from Paris. I looked and found the perfect recipe to try.

Of course, when I told Jim about the cheesecake I was going to make for him, he had to ask, “What makes it French?” My answer, “EVERYTHING!” Goat cheese instead of cream cheese. The technique is different. And, the crust is an actual pie crust, instead of graham cracker crust.

I think we were both in amazement as I was making this cheesecake. The crust filled the entire pan, instead of just the bottom of the pan. The eggs were separated. Yolks mixed in with the cheese mixture and the whites beaten with sugar to make a meringue, that was folded in at the end.

The filling grew in the oven and attacked the the top of the crust. But when it cooled, the crust shrank and so did the cheesecake.

We couldn’t wait to try it. The whole house filled with an amazing vanilla smell.

Jim wanted to slice into it while it was hot. Luckily, I stopped him.

Sadly, we waited a bit too long and the filling shrunk to it’s original size. The crust didn’t look as good as it did when we took it out of the oven.

Oh well, there’s nothing like covering up your mistakes with fruit. Fruit fixes everything.

Taste test. It’s good. It’s rustic. It’s French. A lot different than the American cheesecakes I have made. It’s drier, but creamy. More of a cake texture than a mousse texture.

I like it. It’s different, but really good. Not too sweet. Add honey on top if you like. That would make it even more luxurious. 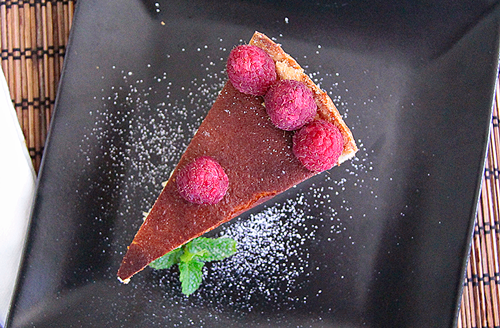 Happy Birthday, Jim. Hope you liked the cheesecake. Now, I have to start planning next years cake.