C – Sometimes I wonder “Why hasn’t this been made much?” when looking for a recipe online. 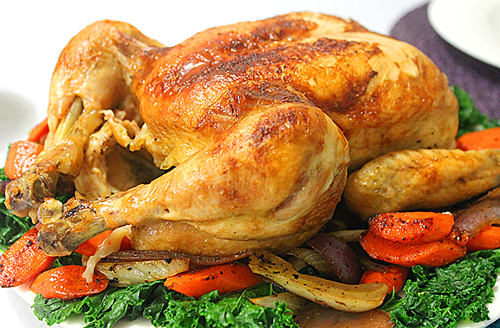 Braising a whole chicken was one of them. We found a few but not too many. Most weren’t rated or not rated well. We figured out the reason quickly.

Jim had the first go at making a whole braised chicken and had me critique it quite a bit. The ingredients sounded good; white wine, carrots, potatoes and lots of herbs. But, the suggested cooking time didn’t make sense to me. It was too short. Forty-five minutes to cook a whole 4- to 5-pound chicken? That seemed really short. When we took it out of the oven, the outside looked cooked but cutting it open showed that it wasn’t. Jim was really disappointed. We had to put the chicken back into the oven and bring it up to temperature … again. He wasn’t happy about that, either.

The chicken tasted good when it did finish cooking. After analyzing the recipe, we concluded that the best cooking time for the chicken would mean the vegetables are going to be over cooked. We realized, again, that recipes sometimes are just starting-off points; we don’t have to follow them to a “T.” Thank goodness!

Jim didn’t want to give up on braising a whole chicken, so it was my turn to make one. I thought about past techniques for cooking a chicken. Roasting and braising chickens are usually really different techniques. I usually roast a whole chicken covered and, then, uncovered at the very end to crisp up. When braising, I usually cut the chicken into pieces and cook for a long time.

I had never braised a whole chicken before, partly because of the difficulty in flipping it to brown on all sides. It seemed like a daunting task. I was afraid of ripping the chicken and ruining the skin. But, I just had to do it.

ME and MY BIG MOUTH.

My technique is a bit different than Jim’s. I liked the idea of having white wine like Jim’s recipe. I thought through the other braised dishes I have made; it is usually low and slow. But, I really didn’t want to cook a chicken at 250 degrees for three hours. It seemed too long and probably not worth it. So, I decided a high temperature of 400 degrees for an hour and ten minutes covered, then uncovered for another 15 minutes might work. 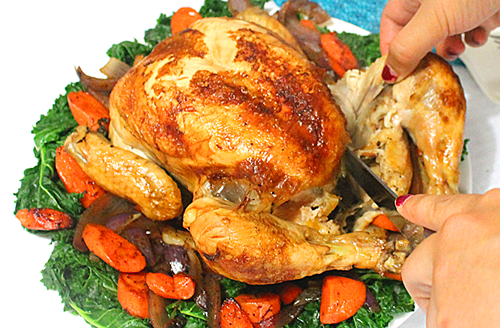 The results were good. After an hour and ten minutes the chicken thigh was separating from the breast. That’s a really good sign that the chicken is cooked. Uncover to crisp and we were looking good to go. I served it with vegetables cooked separately from the chicken, so I had more control. The flavors of the chicken were good. The meat was falling off the bone. The white wine sauce really made the dish complete. 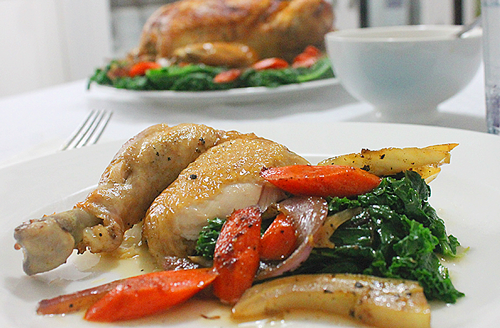 Nice, tender and juicy chicken, that was fully cooked. Just the way I liked it.