C – This pulled pork sandwich wasn’t made in the normal way. 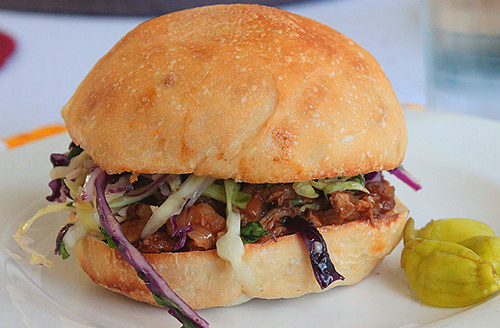 Not from a crock pot or slowly roasting it in the oven, like you normally would. This is a re-purposed pulled pork sandwich. The pork loin was cooked for another recipe, but it didn’t turn out very well. Jim was on a mission to make braised pork, since we already did one braised chicken and another whole braised chicken and, also, a braised beef short ribs recipe. It was time to make a braised pork recipe. 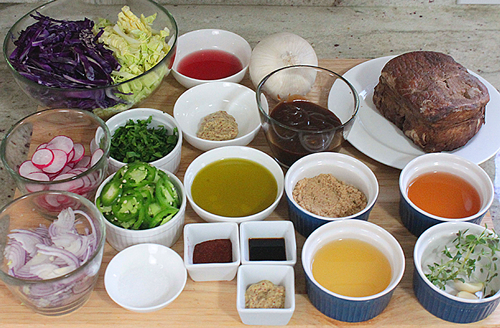 I was ready to be done with braising for a while. But, Jim wasn’t quite ready yet. He promised it would the last one for the season. He went off looking for a recipe and found one. It looked fine. But, when he cooked the pork, it was too dry. He tried the recipe again, adding more liquid and it still wasn’t a success. I felt bad, really bad. But, honestly, I was done with braising meats for a while.

I didn’t want to waste the meat, even though it was dry. Pulled pork was the best thing I thought to try. I was so amazed at how dry this pork was, after all the liquid he added to the pot. Jim tasted it and he confirmed it was dry.

I had to add a lot of chicken stock to the mixture to make the leftover pork juicy. I had to taste and re-taste until I found the perfect amount of seasoning. But, when I was done, it was a perfectly balanced pulled pork.

This recipe is good to use when you have a lot of leftover pork roast. The recipe is also good for uncooked pork shoulder into a crock pot and pour the sauce over the top and cook it for 6 hours on high.

Both ways gave me a nice tender pulled pork, for great pulled pork sandwiches. I served them with a fresh coleslaw. It was wonderful.

I am so glad that this recipe was a success. Jim was glad, too. 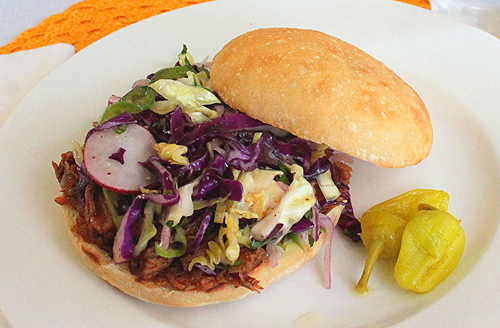